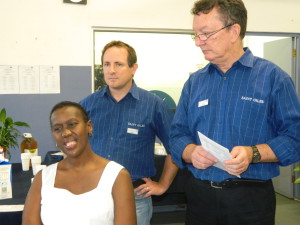 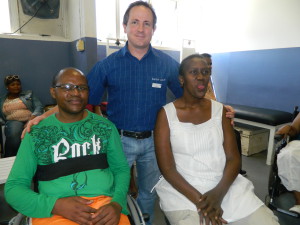 Saint Giles celebrated International Day of Persons with Disabilities on 3 December 2014 with their Remedial Gymnasium patients. The event was opened by managing director, Terry Rennie, and then two members of the gym shared their success stories and thanked the gym and staff members personally for their guidance and help.

Dumisani Khumalo has been attending the gym for six weeks. When he first arrived as a quadriplegic patient he had very little mobility. Under the guidance and motivation of the instructors he can now lift his left arm and touch his right shoulder and the back of his head. “I feel as though I am getting my body back,” said Dumisani.

Pumzile Kubheka had Guillain-Barré syndrome, which is a disorder in which the body’s immune system attacks part of the peripheral nervous system. The first symptoms of this disorder include varying degrees of weakness or tingling sensations in the legs, which may spread to the arms and upper body. These symptoms can increase in intensity until certain muscles cannot be used at all and, when severe, the person is almost totally paralysed. Pumzile joined the gym as a quadriplegic in a wheelchair but she can now walk with a walker and move most of her extremities.

The Saint Giles remedial gym is the only gym of its kind in KwaZulu Natal that is 100% wheelchair compatible. Patients of the gym improve rapidly when exercising on a regular basis and receiving treatments from qualified staff members.

Winners of the donated autoboigraphical books and DVDs called The Language of Me by Musa Zula, who turned adversity into success after being paralysed in an accident, were happily won through a lucky draw by Dumisani Khumalo and Yunus Mulla (both wheelchair patients).

Patients were treated to refreshments and snacks while sharing in the general cameradie of the gym.

The Chatsworth Girl Guides also joined the celebrations and treated patients and staff to mini Christmas cakes. The disabled staff in the Saint Giles Work Centre, where packing and sorting for companies such as Unilever are done, also received a vetkoek and mini cakes.