Unathi Mtolo is a cerebral palsy

learner with speech problems. Since attending the Open Air School from 2012, he has been using an iPad to communicate. This has enhanced his learning capacity and assisted him in producing above average results. Unathi is currently in Grade 9.

At the Senior Prize Giving held on 25th October 2013, Unathi was awarded the Saint Giles Educational trust Prize for a student who best embodies the spirit of the school motto “I CAN AND I WILL” and for his continuous perseverance in achieving his dreams. Unathi intends pursuing a career in the world of Engineering when he completes Grade 12. The Management & Staff of Saint Giles wishes him all the best for his future. 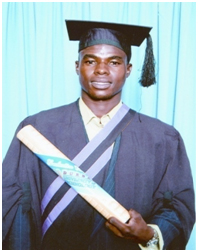 Sihle Mnisi received a bursary from the Educational Trust in 2006 to Start studies towards a 3 year Diploma in Sports Management at the Durban University of Technology. Sihle Completed his studies in 2009 without failing a subject

Sibongiseni Mtshali received a bursary in 2008 to study towards a National Diploma in Management at DUT. In 2010 he spent a year in the USA on a scholarship which was awarded to him by the American Consulate to South Africa as a result of his excellent academic achievements. He returned to South Africa to complete his last year of study in 2011 towards his Management Diploma

Sibongiseni is an albino and also suffers from visual impairment 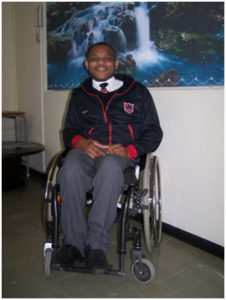 Xolani Shabane completed his schooling at Open Air School in Glenwood at the end of 2012 on a bursary from Saint Giles for Grades 11 & 12. Not only did he achieve excellent academic results but received a number of other awards as well. The highlight of his year was to be awarded the Open Air School Dux for 2012. Xolani has been in a wheelchair since 2004 as a result of a spinal tumour.
His other awards were: 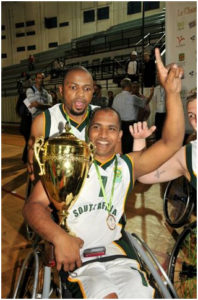 On June 16, 1995, Justin Govender was shot in the back and has been a paraplegic ever since. Justin first attended the Saint Giles Remedial therapy centre in 1996 and started playing wheelchair basketball in 2002.
Justin fast became a wheelchair basketball sensation and competed in the Beijing Paralympics in 2008 as a member of Team South Africa. He was in Team South Africa again for the 2012 Paralympics.

When asked if Saint Giles had had a great impact on his recovery he said: “Absolutely! After the circumstances I found myself in after my injury not many people were willing to help me but the Remedial Therapy Centre, run then by Sport Slade, opened their doors to me and gave me hope. The Remedial Therapy Centre enabled me to recover sufficiently to a level where I could move onto competing in basketball. 10 years later I have enjoyed great success in the sport and am most thankful to Sport Slade and the centre for helping me to get where I am today.”

On 10 February 2008 Mohamed Ismail was involved in a serious motor vehicle accident, leaving him in a semi – comatose state in hospital for months. During this time Mohamed’s musculature and strength deteriorated to such 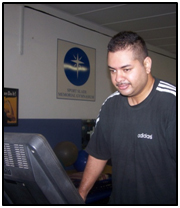 an extent that his mobility was severely hampered. It was only when he came to the Saint Giles Remedial Therapy Centre in February 2011 that the first real signs of recovery became evident

“Since I have joined the Remedial Therapy Centre my confidence has improved and with the help of the trainers it continues to improve. I am now able to walk short distances unaided and with a little help, a lot quicker than before. My balance and strength has increased substantially and coupled with improved flexibility, has helped me to move forward”

Mohamed’s commitment and patience, together with his daily exercise routine, have helped to improve him and we are very proud of his achievements to date

Dumisani Khumalo, a devoted husband and father of four kissed his family goodbye on the morning of Friday, 27th June 2014. He was looking forward to wrapping up his workday and spending some quality time with his loved ones over the weekend. That sadly, was not to be. Dumisani was the unfortunate victim of a “Hit and Run” in Ballito and had to be freed, barely conscious, from his mangled vehicle using the “jaws of life”.

He was rushed to Alberlito Hospital where he learnt that he had suffered a break of spinal discs C4 and C5 which meant that he would not have use of his legs, for a very long time. After 12 long days and nights in ICU, Dumisani was transferred to the Entabeni Hospital for further treatment and rehabilitation for 13 weeks. It was during this time that he was referred to the SAINT GILES Remedial Therapy Centre​.

“From barely being able to breathe, cough or sneeze without assistance, a significant improvement has been noted. My core strength has improved with the help of the capable SAINT GILES centre team, who know exactly what they’re doing. I was always a hands on Dad and I can now continue adding value to my and my family’s life,” says a strong willed Dumisani.

He ended our interview with a quote by Winston Churchill that he says describes our centre staff perfectly: “Never was so much owed by so many to so few”.